New Class of the Global Executive MBA Program of HHL and EADA with Personal Coaching for Managers Starts
Kurzfassung: Students from Brazil, Bulgaria, Germany, Indonesia, Poland, Spain and Turkey form the second class of the Global Executive MBA Program (GEMBA) offered by German HHL Leipzig Graduate School of Management and Spanish Escuela de Alta Dirección (EADA). Each person in this diverse group of outstanding and highly motivated executives has more than ten years of professional experience in fields such as e-commerce, communication, medicine and finance. The average age of the participants is 35. 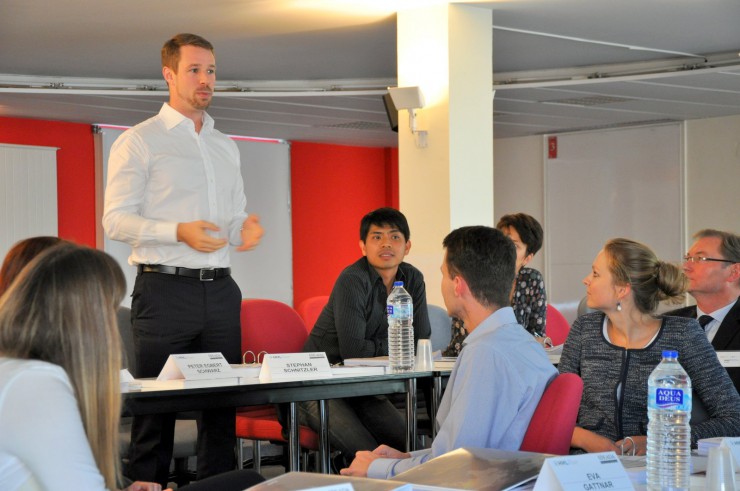 New Class of the Global Executive MBA Program of HHL and EADA Starts. Source: HHL
[HHL gGmbH - 08.10.2013] The "Leading Self and Teams” course provided the participants with first insight into the executive coaching during the opening week of the GEMBA. Regular individual coaching takes place throughout the entire 18-month of the program with a focus on the personal as well as the professional aspects of each participant. They are designed to further develop key qualifications such as communication, negotiation, conflict and diversity as well as intercultural management abilities which are essential for international leadership positions.

The students of the second GEMBA class can test their leadership talent not only by completing an outdoor training program but also by visiting the Neuro Coaching Lab at a special training facility outside Barcelona. Under the direction of Steven Poelmans, Professor of People Management and Director of the Coaching Competency Center at EADA, the international managers have learned through practical exercises such as role-plays accompanied by video recordings and brain scans to be honest with themselves. All participants have a personal coach supporting them individually, based on their personality diagram, until they graduate from the GEMBA program.

The part-time Executive MBA Program which started with a focus on leadership and strategy in Barcelona last week is taught entirely in English. It centers on the peculiarities of business practices in the western European countries (with a special focus on Germany and Spain). In addition, participants will gain insight into the economies and cultures of the Chinese, Brazilian and Indian markets.

The Global Executive MBA Program of HHL and EADA

The structure of the 18-month program has been adapted to the professional and personal needs of international managers. For the "Executive MBA" double degree from HHL and EADA, participants must successfully complete ten six-day residential weeks on various management disciplines over the course of 18 months and write a Master thesis. The Global Executive MBA program consists of eight compulsory modules of which four must be completed in Germany and four in Spain. Another two of three electives have to be completed at renowned business schools in Brazil, China or India.
In addition to teaching core competencies in economics, the development of key qualifications such as communication, negotiation, conflict and diversity management as well as intercultural management abilities, which are all essential for international leadership positions, is a vital part of the program.

HHL and EADA both have a long tradition of academically training individuals for leadership positions and are considered to be strong research institutions in the fields of innovation management, strategic management as well as promotion and development of leadership qualities in their respective countries. Together, HHL and EADA have three international accreditations - AACSB, AMBA and EQUIS.

HHL is a university-level institution and ranks amongst the leading international business schools. The goal of the oldest business school in German-speaking Europe is to educate effective, responsible and entrepreneurially-minded leaders. HHL stands out for its excellent teaching, its clear research focus, its effective knowledge transfer into practice as well as its outstanding student services. The courses of study include full and part-time Master in Management as well as MBA programs, a Doctoral program and Executive Education. In the 2013 Financial Times Masters in Management Ranking, HHL's full-time M.Sc. Program was ranked 9th in the world. In the 2012 Financial Times European Business School Ranking, HHL's MBA program was listed 1st in Germany. HHL is accredited by AACSB International. www.hhl.de