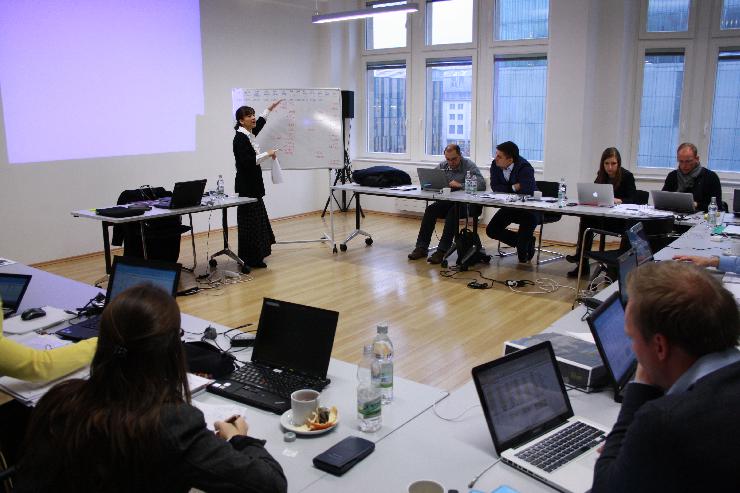 May and September 2013 / Open Lectures in the Global Executive MBA Program of HHL and EADA / Scholarships and early bird discount before May 31, 2013. / Source: HHL
[HHL gGmbH - 29.04.2013] HHL Leipzig Graduate School of Management and EADA Business School invite interested parties to attend the open lectures of the Global Executive MBA Program in Leipzig and Barcelona. The orientation courses take place in Leipzig from May 6 to 10, 2013, and in Barcelona from September 2 to 5, 2013. The Leipzig course week will focus, among other things, on economic topics accentuated by lectures given by experts from the economy (German Federal Bank and Bertelsmann) as well as discussion rounds. Courses offered during the Barcelona week include the topics of strategy and marketing. Potential applicants may join one of the open lectures to obtain a first impression of the program and talk to the international students and professors. They will all be given the opportunity to have a personal counseling interview prior to starting the application process. As an alternative, HHL also offers information on the Global Executive MBA Program in an online event on May 22, 2013. To join the open lectures, please register beforehand and submit your resume. Contact: petra.spanka@hhl.de, phone +49 (0)341 9851-730.

There are various possibilities of financial support for outstanding candidates of the 18-month Global Executive MBA Program. The application closing date for the program starting in September is June 30, 2013. Applicants can receive an early bird discount of 10 percent on the tuition fees before June 31, 2013. http://www.hhl.de/Global-Executive-MBA

The Global Executive MBA Program of German HHL Leipzig Graduate School of Management and Spanish Escuela de Alta Dirección y Administración (EADA) focuses on the development of leadership skills and teaches about intercultural competence and economic peculiarities of management in Southern and Northern Europe as well as Brazil, China and India. The program, which uses English as the classroom language, is designed especially for executives who have obtained significant professional experience but have not studied business administration.

The structure of the 18-month program has been adapted to the professional and personal needs of international managers. For the Executive MBA double degree from HHL and EADA, participants must successfully complete ten six-day residential weeks on various management disciplines over the course of 18 months and write a Master thesis.

The Global Executive MBA program consists of eight compulsory modules of which four must be completed in Germany and four in Spain. Another two of three electives have to be completed at renowned business schools in Brazil, China or India.

In addition to teaching core competencies in economics, the development of key qualifications such as communication, negotiation, conflict and diversity management as well as intercultural management abilities which are essential for international leadership positions is a vital part of the program.

Admission requirements for the Global Executive MBA program are a first-level academic degree, a minimum of five years professional experience of which at least three years is in a leadership position, and an excellent command of English. The tuition fees, including course material as well as room and board during the residential weeks, amount to EUR 43,000. http://www.hhl.de/Global-Executive-MBA

HHL is a university-level institution and ranks amongst the leading international business schools. The goal of the oldest business school in German-speaking Europe is to educate effective, responsible and entrepreneurially minded leaders. HHL stands out for its excellent teaching, its clear research focus, its effective knowledge transfer into practice as well as its outstanding student services. The courses of study include full and part-time Master in Management as well as MBA programs, a Doctoral program and Executive Education. In the 2012 Financial Times Masters in Management Ranking, HHL's full-time M.Sc. Program was ranked 11th in the world. This ranking also awarded HHL first place worldwide for its focus on Entrepreneurship and second regarding the graduates' future salaries. The 2012 European Business School Ranking by the Financial Times confirms it: HHL offers the best full-time MBA and M.Sc. programs in Germany. In the current ranking by the Latin-American business magazine AméricaEconomía HHL scored 28th place. HHL is accredited by AACSB International. http://www.hhl.de

The Escuela de Alta Dirección y Administración (EADA) is an international business school located in Barcelona, Spain. It offers programs for Master's, MBA and Executive Education. EADA's International Master in Management Program is ranked among the 30 best programs in the world by the Financial Times. This program has been ranked exceptionally high for career progress, with the Financial Times placing it 19th worldwide. The International Master in Finance Program ranks among the 20 best programs of its kind as well. In addition, EADA has been ranked among the top four business schools in Spain. In the 2012 Financial Times European Business School Ranking EADA reached 23th place. EADA is accredited by AMBA and EQUIS. http://www.eada.edu