Flockpix - HHL's next Ace of Spade
Kurzfassung: The first app that offers outfits based on emotions. 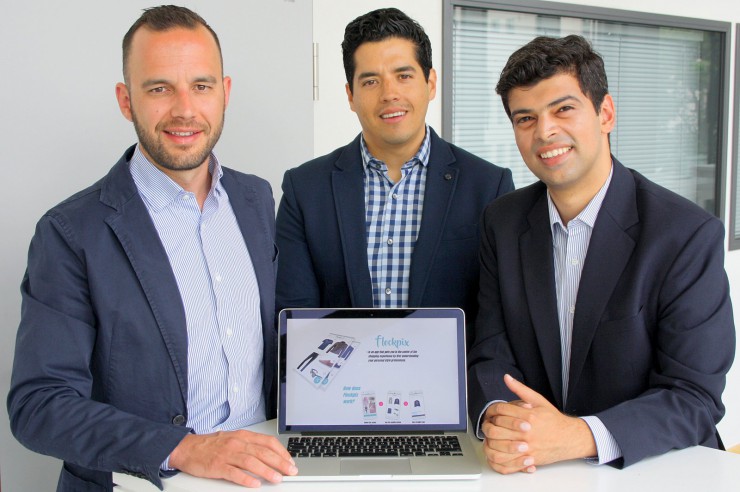 MBA students of HHL Leipzig Graduate School of Management and founders of Flockpix: (from the left) Francisco Jimenez, Rodrigo Aviles, and Aneesh Bhardwaj. Photo credits: HHL.
[HHL gGmbH - 26.06.2017] Flockpix is a new lifestyle app for both men and women that allows users to create complete outfits for themselves based on how they feel. Flockpix puts the user at the center of experience by clearly understanding personal preferences and digitally creating outfits suited to individual needs. In addition to this the user has the option to buy complete outfit or parts of it on the spot or add it to the wishlist for later review.

‘FUNSPIRATION' is the company's mantra which defines the product and also the company. Users of the app are met with best in class user interface which suggests the users with style choices based on what they feel. Powered by Flockpix algorithm, the app combines the best in technology and fashion in one single mobile application. The Flockpix algorithm which powers the application provides intelligent selection of outfits for the users which can be instantly refreshed if the user wants. In addition to this Flockpix provides it BINI Business Intelligence report to partners joining the platform, making it a major draw for e-commerce retailers.

Although it is the youngest startup from HHL, it is creating a buzz in the fashion industry even before its seed round. Started by three students of HHL's Full Time MBA program, the founders - Rodrigo Aviles (Mexico), Aneesh Bhardwaj (India) and Francisco Jimenez (Mexico) are still part of the program and work on the mobile application at night. "Developing products is our passion and the only time we could find was at night so every night after dinner, we started meeting and developed the application in record time,” they say.

When asked about the strategy of the startup, the founders comment: "Our clear focus is to create the most intuitive shopping experience in the world. Flockpix will continue to grow on the foundations that it has created which is: creativity, relentless customer obsession and superior user experience.” With a soft launch in April, the company was able to conduct extensive tests in terms of user behavior and technology which helped Flockpix to clearly understand the market. The app which is now undergoing a full upgrade before the unveiling planned to be in the second half of the year.

The Leipzig based startup which is on lookout for seed investment to fuel its growth and keep up with the signature speed of development is pragmatic about its investment approach. "Flockpix has clear approach about its investment, our core business to ensure the best user experience to users. Since all three founders are seasoned managers, investors can be assured of high performance standards and pragmatic management of invested capital,” claims Flockpix's management team. Besides developing the product and the operative side of the company, the Flockpix team has invested significant time on understanding how to make the business model and the company structure more profitable. In that regard, most recently Ricardo Aramburo Williams, a renowned international tax and legal specialist with special focus on Technology, joined the team, allowing Flockpix to efficiently adapt to any legal and fiscal conditions in each country it will operate.