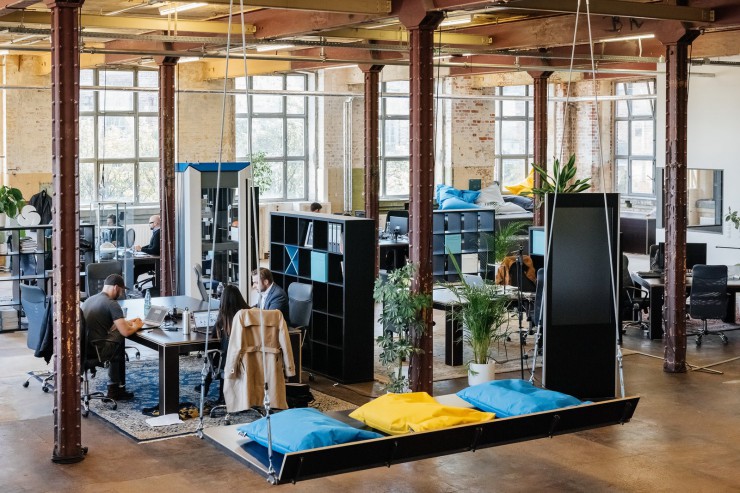 HHL named Germany's best entrepreneurial university for the third time in a row. Photo credits: Tom Werner.
[HHL gGmbH - 21.02.2017] HHL Leipzig Graduate School of Management received further recognition as a one of the best hotbeds for entrepreneurs in Germany. After the two previous rankings in 2013 and 2014, the school once again reached the first place in the Start-up Radar ranking published by Stifterverband für die Deutsche Wissenschaft (Founder's Association for German Science) and encompassing all German business schools and universities with up to 5,000 students.

The ranking published by Stifterverband shows how well universities support students and researchers in their entrepreneurial activities. It illustrates the various strategies and success factors in entrepreneurship facilitation in a comprehensive and comparative fashion and offers recommendations for politicians and universities. Under the patronage of the Federal Ministry for Economic Affairs and Energy and in cooperation with the Heinz Nixdorf Foundation, Stifterverband gives a vital impetus for the further development of entrepreneurship facilitation at universities.

HHL Dean Prof. Dr. Andreas Pinkwart says, "The latest commendation by Stifterverband is important recognition and great motivation for the entire HHL community. It underlines the position as an entrepreneurial university with the innovate125 Future Concept and gives us another boost for the ongoing establishment of the Center for Entrepreneurial and Innovative Management (CEIM) as well as SpinLab - The HHL Accelerator as a cross-university platform for start-up facilitation. It is also a compliment to the numerous founders and supporters as well the HHL staff who have shown great passion and commitment to the topic of entrepreneurship and offer a wonderful network for all those in research, teaching and practice who are interested in starting their own businesses."

HHL also makes an impact by raising awareness for entrepreneurial issues. The Leipzig business school has increased cooperation with other universities over the last few years by organizing start-up boot camps. HHL launched one of the most successful entrepreneurship conferences in the region of Central Germany with the HHL International Investors Day and created yet another international format with the Indian Business Day.

One of the keys to HHL's success is the support of entrepreneurs which was taken to a professional level with the school's Center for Entrepreneurial and Innovative Management (CEIM). It coordinates the facilitation of start-ups at HHL and also offers a network including many institutions from the region. Special support for bio-economy start-ups is provided through the GISBERT cooperative project. The stakeholders in entrepreneurship facilitation at HHL are the three entrepreneurship-oriented chairs, the accelerate@HHL student initiative, Selbst-Management Initiative Leipzig (SMILE; Self-Management Initiative Leipzig) as well as Verein für Innovation, Existenzgründung und Wachstum an der Handelshochschule Leipzig e.V. (VIEW; Association for Innovation, Business Start-up and Growth at HHL).

Activities organized by HHL include regular start-up workshops with guest speakers from science and practice as well as field projects during which student teams led by a chair collaborate with start-up founders and examine their business idea for marketability in addition to the aforementioned HHL International Investors Day and the India Business Day. One important aspect of entrepreneurship facilitation at HHL is the involvement of former students in these activities. First, the alumni are included by giving presentations and joining the Start-up Career Fair, which takes place every six months. On top of that, the alumni network specifically approaches company founders. The important role that the alumni play in the HHL students' start-up projects is also reflected by their high presence in the initiation and support of the start-ups founded at HHL.