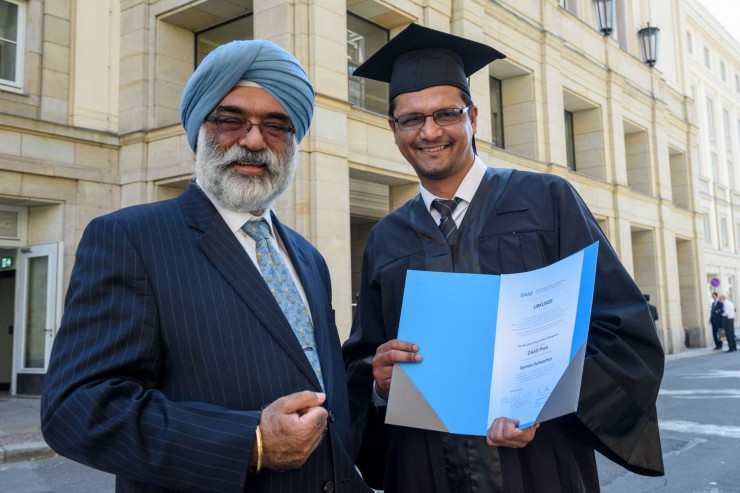 2016 DAAD awardee and MBA student at HHL, Sayantan Chattopadhyay (right), with Gurjit Singh, Ambassador of the Republic of India to Germany. Photo credits: Jens Schlueter/HHL.
[HHL gGmbH - 29.08.2016] Again a graduate of HHL Leipzig Graduate School of Management happily received the award as the best foreign student. Last Saturday, August 27, 2016, Sayantan Chattopadhyay, 43, was awarded with the EUR 1,000 endowed prize of the German Academic Exchange Service (DAAD) during the graduation ceremony. The Indian Ambassador in Germany, Mr. Gurjit Singh, was also in attendance.
Only 230 out of the approximately 320,000 foreign students in Germany received the award this year. It is given to students from abroad who are enrolled at a German school and who stand out due to their excellent academic performance and their social or intercultural commitment.

"Talented students are very welcome here and we are happy if they study successfully with us. The DAAD Award acknowledges outstanding achievement. I am pleased that we can enable schools such as HHL Leipzig Graduate School of Management to attract international talent with our DAAD program," says Prof. Dr. Margret Wintermantel, the DAAD President.

Gurjit Singh, Ambassador of the Republic of India to Germany, comments, "We emphatically support student exchanges between India and Germany. In this context, HHL plays an outstanding role. We have been sponsoring the Chair of Corporate Responsibility and Governance at the Leipzig-based business school for quite some time now; many Indian students come to HHL while a large number of HHLers go to study in India."

Sayantan Chattopadhyay, originally from Calcutta, has studied in the Master Program in General Management (MBA) at Germany's first business school since fall 2015. In addition to excellent academic achievements, Chattopadhyay has, amongst other things, worked as an instructor for the General Management Admission Test (GMAT), the English-language admission examination for international business schools, during the past few months. During his time in Leipzig, the father of two also managed to perfect his German.

Concerning his decision to enroll at HHL, Sayantan Chattopadhyay says, "Low costs, a stable labor market and a very good cost-performance ratio make HHL a very attractive MBA school." He continues, "My background is in Mechanical Engineering and I have spent the biggest part of my career outside of India, e.g. in the Persian Gulf. I realized early, however, that business knowledge is important for technical professions, and I decided to get an international MBA degree."

Inspired by courses in finance at HHL, the interests of the DAAD awardee have shifted towards the direction of finance. Directly after his MBA studies, he will complete an internship in the Finance Department of IDT Biologika. The company, which is headquartered in Dessau-Roßlau and specializes in the development and production of medication - especially immunity biologicals, is not unknown to the DAAD awardee. Alongside the German government, it was a co-financer of the National Scholarship which Sayantan Chattopadhyay received during his studies.