HHL Rated as One of Germany's Most International Universities 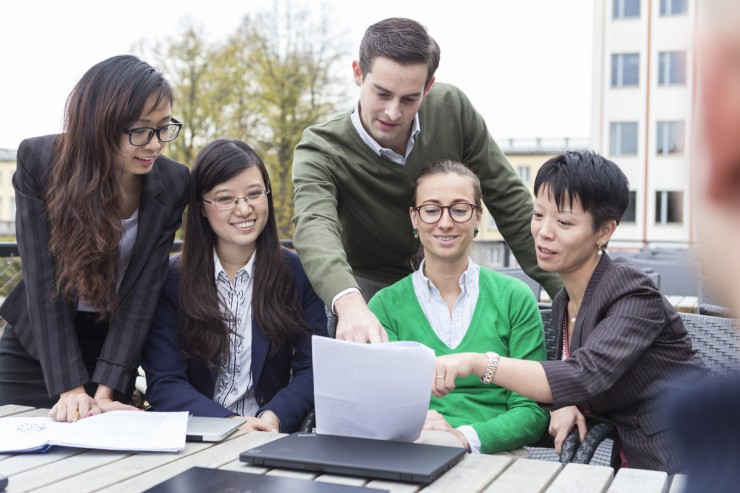 HHL Rated as One of Germany's Most International Universities. Photo: HHL.
[HHL gGmbH - 03.11.2015] HHL Leipzig Graduate School of Management managed to score in the top ranks again in several categories of the "Profildaten zur Internationalität der deutschen Hochschulen 2015" ("2015 Profile Data on Internationality of German Universities") study within the group of the smaller universities with up to 20,000 students.
According to the survey of German universities commissioned by the German Academic Exchange Service (DAAD), the German Rectors' Conference (HRK) and the Alexander von Humboldt Foundation (AvH), HHL ranks first for its number of partner universities per professor. The school also secured itself a podium position for the number of DAAD scholarship holders in all categories.

HHL Dean Prof. Dr. Andreas Pinkwart says, "The latest profile data show once again that HHL ranks among the nation's most international universities. It manages to recruit the best for Germany in worldwide competition. HHL also manages to provide German students with the best global development prospects thanks to international cooperation." The Leipzig business school has been committed to internationality in a special manner since its re-establishment. In the late 1990s, HHL was one of the first universities in Germany to offer all of its academic programs in English. Prof. Dr. Pinkwart comments on the HHL's results in the study on the internationality of German universities, "This reflects the positive effects of a long-term internationalization strategy."

The survey is based on data collected between the years of 2010 and 2014 by the Federal Statistical Office, the ERASMUS student exchange program, the DAAD funding statement, the Higher Education Compass by the German Rectors' Conference, the Alexander von Humboldt Foundation as well as the universities themselves.

In its 117th year of existence, HHL Leipzig Graduate School of Management has become one of the Germany's leading business schools with an outstanding international reputation. HHL's internationality manifests itself in its accreditation, the top ranks scored in recent rankings, the numerous memberships in international academic organizations, the worldwide network of over 120 partner universities with active student exchange programs, the increasingly international faculty as well as international research projects and student initiatives.

HHL was the first business school in Germany to be accredited by AACSB International in 2004, the renowned accreditation organization for business schools all over the world. HHL has repeatedly scored in the top places in international rankings of the Financial Times as well as the Latin American AméricaEconomía and Expansion business journals.

HHL is actively involved in renowned associations of international business schools (AACSB, CLADEA, CEEMAN, EFMD, NAFSA, EAIE). The Leipzig hotbed for entrepreneurs has ties with more than 100 business schools worldwide. This comparatively high figure can be explained by the fact that HHL intensely seeks to promote intercultural student exchange and therefore only sends a maximum of two students to an international partner university at one time. HHL tries to accommodate the students' wishes for attractive electives when entering cooperation agreements with other universities. Frank Hoffman, Director of International Relations, says, "When choosing our international partners, we take into consideration the accreditation, the academic reputation of the institution, the attractiveness of the university location and the students' safety in the country of destination."

Each year, 100 HHL students take a term abroad at one the international partner universities. Consequently, HHL welcomes the same number of international exchanges to its campus in return.

The full-time MBA Program in General Management is of great interest to both German students as well as more than 80 percent of the international students due to English being the working language on campus and in the classroom. This fact also explains the increasing number of students in the HHL Master of Science in Management Program.
The classes at HHL are taught by an expanding faculty from the US, Canada, Denmark, Norway, Sweden, the UK, India and Israel. The two Global Executive MBA and Euro*MBA programs offered by HHL have an international focus as well. The Global Executive MBA Program jointly executed by HHL and Spanish Escuela de Alta Direccíon (EADA) includes elective modules at renowned business schools in Brazil, China or India in addition to the compulsory modules in Germany and Spain. The Euro*MBA Program is an innovative two-year MBA program based on e-learning for executives. It is organized by the Euro*MBA Consortium founded in 1996 and consisting of five other European business schools in addition to HHL Leipzig Graduate School of Management, which joined in March 2008.

HHL's research and the Doctoral Program are closely connected to international partners as well. The school's Chair of Marketing Management, for example, works in hand in hand with the Harvard Business School in the field of cluster and competition research.

The international diversity on the HHL campus is promoted by The Negotiation Challenge and European Ivy League student initiatives. The Negotiation Challenge is an international and unique negotiating competition jointly initiated by HHL and Harvard Law School in 2007. HHL students also organize the European Ivy League soccer tournament which is the highlight of the year for business students keen on soccer from all over Europe. Since 1997, the European Ivy League has promoted athletic challenge and team spirit. The motto for the two-and-a-half-day sporting event in May 2015 was "Business Meets Soccer". http://www.hhl.de